The Sounds of Summer Weather 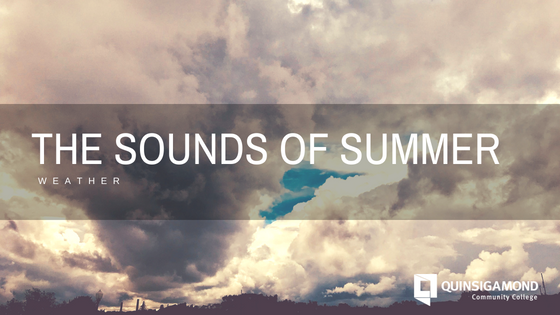 Does the sound of thunder get you cowering under the table? Is a bolt of lightning something that fills you with awe or dread? Summertime brings weather with a mind of its own… occasional storms of epic proportions that form in the blink of an eye. Ever wonder why?

Amy Berg, a QCC science faculty member teaches a course called: Climate & Weather: Causes & Effects. Amy’s students learn that all storms require energy to generate wind and rain, which is why hurricane season happens during months when the ocean temperatures beneath the storms is the warmest.

More direct summer sunlight brings even more energy to the atmosphere. When the sun warms the earth, the air above the earth also warms and begins to rise. That warm (and usually humid) air meets colder temperatures above, water vapor condenses and storm clouds form. Winds cutting through this rising air can cause rotation, this rotation is what concentrates to form tornadoes.

“If a large amount of moisture is contained in the rising air, then it quickly condenses into liquid into the clouds, it can fall out as torrential rains causing flash flooding. Often the air above it is cold enough that the rain actually freezes into ice crystals,” Ms. Berg said.

It gets even wilder when those crazy summer thunderheads that pop up may contain ice, which rises and falls between warm and cold air multiple times, leading to hail. Anyone who has been caught in a hailstorm knows they have potential to cause quite a bit of damage.

Additionally, as the ice crystals rise and fall they also rub against each other and exchange electrons.  This makes the top and bottom of the cloud electrically charged.

Cloud-to-ground lightning causes power outages, fires, and injuries. The National Weather Service issues forecast warnings ahead of severe weather to give people time to seek shelter. These warnings are sent out to help prevent needless tragedies and should always be heeded.

Interested in weather? You don’t have to be a full-time student to enroll at QCC. If you want to learn more about the science of weather and other environmental natural, and physical science check us out online.