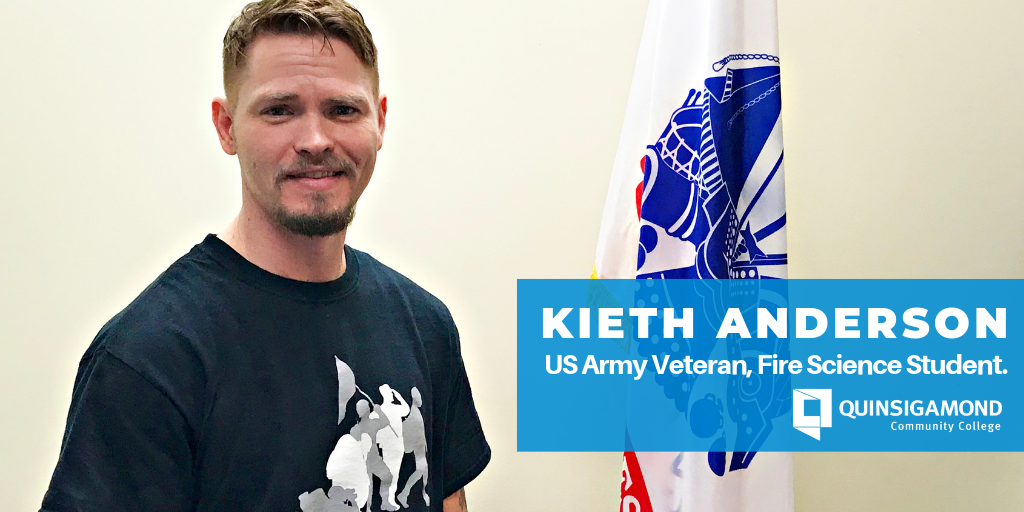 “I just had kind of a natural inclination to join fire service,” he said.

Regardless of his dream to follow in his parents footsteps and become a firefighter, he put that dream on hold for a while, for 14 years to be exact. Kieth enlisted in the US Army and served his country for 14 years. A few months before his service was up, he started thinking about going back to school for fire science. Married now, he got to talking to his father-in-law, a QCC grad. His father-in-law had always spoken highly of his time at QCC and with the Fire Science Program, it seemed like the perfect fit.

So, here he was. From the battlefield to the classroom, he had committed to an education and set his sights on another type of service. Though many of us may not understand, transitioning from military service to student status can be a bit nerve-wracking.

“Coming from the military, I felt I didn’t have any control. It had been so long since I was a student of anything,” he said.

The transition was made a bit easier with the help and support of QCC’s Veteran Affairs and the Veterans Club. With that support and network of student veterans it helped to ease the nerves and start his new journey... getting acclimated to college.

“I came straight here (Veterans Club) and they pointed me to all the right offices, helped me with paperwork I was confused about, and got the enrollment process going for me,” he said, adding that an academic advisor was there for him every step of the way. “If the academic side is becoming overwhelming, the Vets Club is a nice place to retreat. It’s a place you can come to talk to people who understand what it was like to be in the military.”

Kieth plans to graduate in 2019 with his Associate Degree in Fire Science. Having a degree is not an actual requirement to being a firefighter, but it does help to make a candidate more competitive in the job market.

“It gives you the edge and there’s more opportunity for advancement,” he continued.

While some municipalities have age limits for firefighters many of the smaller communities do not and he's hopeful he can find a job in one of those communities, ideally the town he currently lives in.

“Really all I’ve ever wanted is to give back to a community that’s given so much to me. I want to do what I can for that little community and hope to get out of it a chance to serve in a selfless capacity,” he said. “I felt like that was what I was doing in the military and I want to continue. That’s what I hope to get out of the degree.”

Mr. Anderson currently lives in Milford with his fiancée and son.

Interested in becoming a firefighter? Learn more today about how to get your Fire Science Associate Degree or Certificate at Quinsigamond Community College.