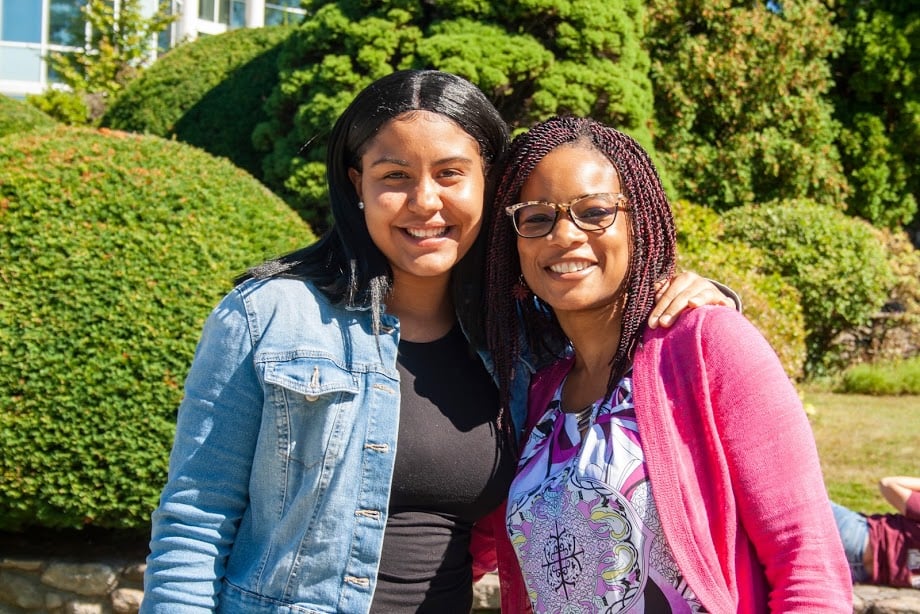 Zuheyry Encarnacion has found her secret weapon, her motivation and her self confidence. Since she started criminal justice classes at Quinsigamond Community College, she's has had the support and guidance of a special woman -  Dr. Natalie Anumba, a forensic psychologist and assistant professor at the University of Massachusetts Medical School. It could have been fate, it could have been luck, it could have been in the stars... however, this pairing came to be through the mentoring program at Quinsig. While their mentoring relationship and Zuheyry's education are a journey and a work in progress, the result so far has made a huge impact on the lives of both of them.

As a new student, she was encouraged by her Mass EDCO (Massachusetts Education and Career Opportunities) advocate to get into the mentoring program. QCC’s mentoring program connects students with staff, faculty, industry, and community members to create perfectly paired one-on-one mentoring relationships. Program participants receive extensive benefits, and the mentors can also take advantage of professional development and networking opportunities. so, she took their advice and was matched with Dr. Natalie Anumba, who was also the first of the community partners to become a QCC mentor.

“I didn’t want to do it at first but I’m so glad I did. Natalie helps me with my major and helps me with resources in my career. She got to know me,” Zuheyry said. “She’s my motivator even if I’m having a bad day.”

Dr. Anumba learned about the program when she heard QCC President Dr. Luis Pedraja speak at a Worcester Chamber of Commerce event. Dr. Pedraja got her attention during his talk on mentoring when he said that employers need to pay attention to the local workforce because there’s a wealth of potential right here in Central Massachusetts. Dr. Anumba approached Dr. Pedraja right after the program to find out how she could get involved. And the rest is history... in progress.

“There is a demand for mentors and mentoring is so important. I look back at my career and the people who contributed to it and the mentors along the way,” she said. “I personally feel like I’m contributing to something special that’s in-line with my skills.”

Dr. Anumba was there when she was trying to get a work study job on campus. Zuheyry felt as though“everything was going horrible" and she was hitting road blocks... so she reached out to her mentor.

“Natalie said to keep trying you’re almost done and then I got called to do work study with Eduardo Rivas (who does the Volunteer Income Tax Assistance (VITA) program),” she said. “Having someone in your corner, no matter what, is amazing. Not a lot of people can say they have emotional and academic support.”

Master matchmaker Gabriel Santner is the Director of Mentoring for Perkins Programs at QCC. He works hard to find the best match for each mentor and mentee. This year there are already 130 mentor/mentee matches and Mr. Santner expects to end up with about 150 within the next few weeks. In fact, this year five core community partners have signed on to be part of the mentoring program - AbbVie Biopharmaceuticals, The City of Worcester, University of Massachusetts Memorial Healthcare, Hanover Insurance and Love Your Labels.

Zuheyry's  goal is to graduate in December and transfer to Worcester State University. Her dream is to one day become a detective and said she will keep pushing to meet that goal, not only for herself, but for her three-year-old daughter.


While her academic career at QCC is coming to an end, Dr. Anumba and Zuheyry plan to continue their mentoring relationship.

“What you put into this program is what you get out of it and I’ve gotten a lot,” Zuheyry said.